Details Construction Group provides an array of Altamonte Springs home remodeling, kitchen and bathroom remodeling, and whole house renovation services. Nestled in the southwest corner of Seminole County and located a dozen miles north of downtown Orlando, Altamonte Springs has a rich history as one of central Florida's oldest settlements dating back to the 1870s when wealthy northerners sought a warmer climate for the winter months. That's not to say the city's available real estate is mostly comprised of historic residences. In fact, almost 90% of the homes were built after 1990 when the city began to evolve as one of Orlando's northern suburban centers. According to current housing statistics, around 40% of all housing units have three or more bedrooms. With a modest median price for purchasing an existing home, the area offers a wide range of options for today's homebuyer including full restorations, bedroom additions, kitchen remodeling, sunroom conversions, bathroom remodeling and outdoor additions as well as cozy renovations for those seeking smaller living spaces. Altamonte Springs was picked by Niche as the #5 of 497 Best Places for Millennials in Florida.

If you want authentic neighborhoods as opposed to the gated suburbs, Altamonte Springs is an excellent place to live. The city has a total area of 9.5 square miles and is conveniently located at the intersection of two key roads in SR436 and Interstate-4. The city's odd-shaped boundaries are defined in our service area map below: 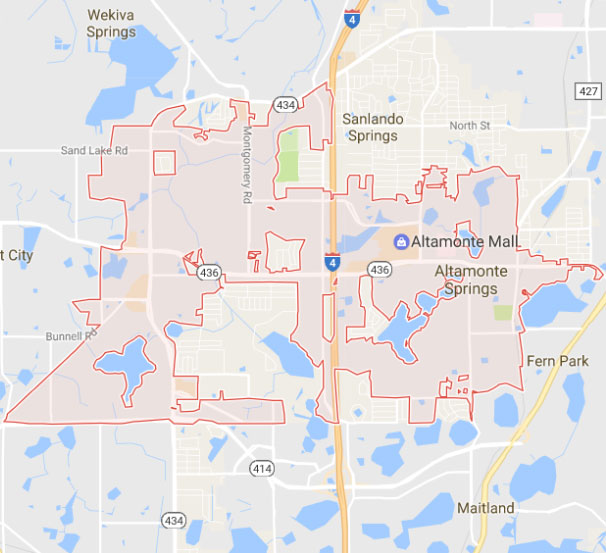 Today, the central business area of the city is known for its shopping and Cranes Roost Park. An outdoor town center named "Uptown Altamonte" is a blend of parks, mixed-use shops, high-rise condominiums and large-scale apartment buildings. With current home values down, it is a buyer's market and a perfect time for a whole home renovation. Here's a partial listing of upscale to middle-income residential neighborhoods:

Although the city of the "high hill" was originally developed as a winter resort community with one of the area's first golf courses, referred to as the "Damned Trees Course" by guests, deed records show that Boston-based investors began selling real estate lots around Lake Orienta, Lake Adelaide and Lake Florida in the later part of the nineteenth century. During recent years, Altamonte Springs has been a host city to several local special events in the Orlando area, including Red, Hot, & Boom, Central Florida's largest Independence Day Celebration.

The first person of record to settle into the area was Dr. Washington Kilmer of Cincinnati. Called Snowville (circa 1870), the early city had four residents. In 1880, when the South Florida Railroad completed the line from Sanford to Orlando, a flag stop was established at Snows Station. With a growing demand for winter tourism, Boston investors chartered the Altamonte Land, Hotel and Navigation Company, with plans to build a winter "Florida Boston Town". The Altamonte Hotel was built on Lake Orienta and guests were transported from the railroad stop by a horse-drawn tram. The hotel and nearby springs became known for rest cures and medicinal qualities for the treatment of consumption. With the Altamonte Hotel the center of social life, winter cottages and homes were being constructed around the nearby lakes. During the 1970s, new home builders gobbled up the Florida Cracker-style buildings and historic citrus groves to build new homes and develop an Altamonte Springs suburban area. Just minutes from downtown, the city is centrally located within 30 minutes of Orlando International Airport, Orlando Executive Airport and Sanford International Airport.

If you are looking for suburban conveniences with access to Orlando's major roadways, Altamonte Springs offers many affordable opportunities for today's homeowner. Whether you are considering an Altamonte Springs home remodeling or whole house restoration, Details Construction Group is conveniently located to serve your restoration and remodeling needs. Our experience in all aspects of construction, home renovation, kitchen and bathroom remodeling, bonus room additions, outdoor living spaces and residential landscaping can save you money and time. Call us today at 407-221-7406 to discuss your Altamonte Springs home remodeling project.